Did you know, according to the latest published figures, the Ambulance Service received over 11 million emergency calls nationwide? Of those 3.5 million were immediately life threatening but only 1% were for a cardiac arrest where defibrillators (AED) would be used. 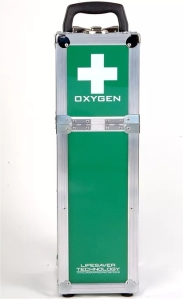 In life threatening situations it can be assumed that oxygen would be used in the vast majority of cases, as well as being essential after the implementation of an AED.

We all require oxygen to live. While the air normally provides sufficient oxygen many injuries & illnesses can produce a condition known as “shock”. Medical shock can result in a life-threatening loss of oxygen and other nutrients to the cells of the body. During shock the blood & oxygen normally carried to the brain & nervous system decreases. Bodily functions and processes slow down and vital organs begin to die. If the causes of shock are not removed or stopped, the result will be death.

Jeff Gregory of Lifesaver Technology wants to help you care for your colleagues, customers or friends when a sudden illness or accident occurs on the premises.

He believes that sometimes the best innovation comes from products that already exist. He first saw an oxygen product in the United States over 25 years ago!

It took many years of research to find the quality suppliers he needed to produce Lifesaver Technology’s unique emergency oxygen equipment.

This year they are through to the finals of Devon’s Fast Track to Growth competition #FT2G2017 organised by Astley Media & Devon County Council.

Lifesaver Technology offers the most simple to use, fixed flow portable oxygen unit available in the UK today. Unlike other forms of equipment it is designed with the non-medical rescuer in mind, ready to use within seconds of an accident or sudden illness.

The length of time between the onset of that medical emergency and the arrival of professional help can be considerable but it is that time which is crucial to a successful recovery and outcome for the casualty.

With a safe fixed flow rate, it can provide a supplemental supply for up to 60 minutes while awaiting the professionals.

A simple on-off lever, with none of the usual dials to adjust, reduces rescuer anxiety, while the dual purpose facemask provides important protection during basic life support.

Jeff believes emergency oxygen should be viewed in the same way as fire extinguishers, hopefully we will never need them but if we do they are there, ready.

Obviously, emergency oxygen equipment administration needs a short training course, just like defibrillators or any other workplace equipment. Don’t worry, Jeff and his team will take care of that.

Now all that needs to happen is that every business in the UK needs to be aware that having a portable oxygen supply available would be a very useful, logical addition to their First Aid kit.

If you’d like to know more simply complete the form and I’ll get someone from the team to make contact within 48 hours.